Behind every clever man, as we know, lurks a pretty fabulous wife.  Earlier this month, Giles’ meant-for-The-Times Skyfall article never made the paper.  It was too damn brilliant for The Times to understand its relevance.  Instead, the food critic posted the piece of prose on wife-journalist Esther Walker’s blog for her readers (and his Twitter followers) to enjoy. 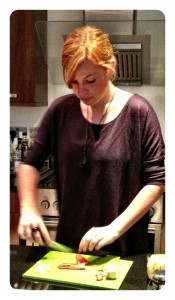 Esther gets chopping once she has got over the shock I have no apron!

Recipe Rifle is Esther’s pocket of the www. There she posts her recipes and so much more.  I feasted (excuse the pun) on a large quantity of her daily musings and roared away at my laptop.  And then I couldn’t help myself but get in touch.  NOT because she’s married to him who we all, of course, can’t help but adore but because she is quite brilliant entirely in her own right.

I always wonder what’s it’s like to be wife-of-blah-blah.  I mean He is obviously great and all that but not necessarily a household bit of totty.  Esther (known as The Bad Cook in the literary world – the e-book of her blog launches in Feb next year) popped over last week to show me how to cook her Asian Baked Salmon but also so that we could chat food, Hims, parenting (Kitty is almost 2 and she has one more on the way) and our lives as bloggers. 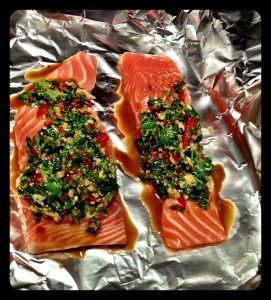 What makes you reach for your apron?  Dinnertimes rolling round yet again and mouths to feed.

What makes you decide to do one recipe over another?  Not too many strange ingredients and not too many carbs.

Who taught you to cook? NO-ONE! I am entirely self-taught. As my guests might be able to tell. 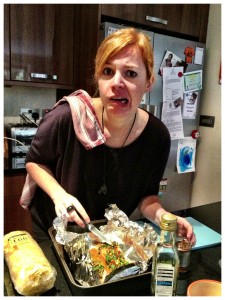 too much chatting and Esther forgot the 5 spice!

Do you dream about food? Never.

Does Giles criticize your cooking? Only incredibly politely and helpfully.

How often do you eat out? It depends – it used to be three or four times a week, now maybe once a week.

Can you mass cater? I can but I find it a bit stressful – Giles does most of the entertaining cookery.

Shocking recipe disaster? Oh god some very undercooked chicken once. And a stew where I hadn’t browned the meat and onions off first. It was for a dinner party and the onions were basically raw. It was AWFUL. Shudder.

Tell us what you would blog about if it wasn’t food. I’d just moan on about motherhood I suppose.

How do you cook with morning sickness? You DON’T, or you do it in short bursts between lying down and groaning.

Are you a Jamie or Heston gal? God are you mad? Jamie.

Best meal you’ve ever had in London? I absolutely love Ceviche in Soho but my first proper smart dinner that really blew my mind was in The Glasshouse in Kew.

Where would we find you with an afternoon to yourself? I wish I could say in an art gallery or going for a walk but I’d probably be poking about on the Internet or in Brent Cross.

What’s the best advice you’ve ever been given? “When in doubt, do nothing.”

Who would you LOVE to cook for? Prince Harry, he looks like a massive laugh and also the mega posh never mind about bad food.

Who would you love to cook for YOU? Anyone who can make good sushi. Or dim sum.

Can Giles cook? Yes, he’s very good. He’s a generous, imaginative and brave cook, whereas I am timid, bitter and lazy.

Tell us a Coren secret. Giles is incredibly ticklish and is a huge Blondie fan.

dinner is served later to an impressed Him

The best of Recipe Rifle will be available to download as an e-book called THE BAD COOK (£1.89) from Feb 2013.

Filed under food, him

One Response to You know Giles Coren. Now meet the wife.