“You could not pay me enough to be 24 again!’ Lena Dunham’s Girls / Sky Atlantic 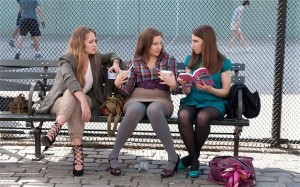 I was pretty sure that Sky Atlantic’s new American comedy Girls was not aimed at me.  Chronicling the lives of four feckless twentysomethings in NYC and written by a 26 year old didn’t exactly sell the series to me.  And then there was the issue that we don’t have the Sky Atlantic channel. But, with a friend desperate to see, I asked Sky Press Office to send me a few episodes for review.

Last night I watched the first three episodes.  At first glance, I was right.  The show is all about 20-something bad sex, unsexy poses and some rather spoilt, over-educated middle class kids. The opening scene of the first episode introduces us to Hannah (played by Lena Dunham herself) as her parents inform her of their decision not to support her financially going forward.  Hannah is shocked to the core as she clearly feels entitled to their support  – as she writes her book.  Straight faced she tells them:  ‘I might be the voice of my generation. Or a voice. Of a generation.’

So, the arrogance continues and the feeling of entitlement increases.  It’s pretty irritating but probably the most annoying thing about this show is how real it feels.  The unsexy sex, false friendships, awful romance and youthful arrogance are all a true reflection of their generation.  And that’s why Girls was nominated for four Emmys and US critics have called it ‘an exciting moment in television history’ and why UK ratings for the show will also go through the roof.

But I am 41, still adore Carrie Bradshaw and won’t be watching Girls.  You honestly couldn’t pay me enough to be 24 and watch this.

Girls is on Sky Atlantic on Mondays at 10.00pm