What does it say about me if I hate life to be too predictable?  It’s not that it simply irritates or bores me.  It quite literally makes me want to SCREAM! 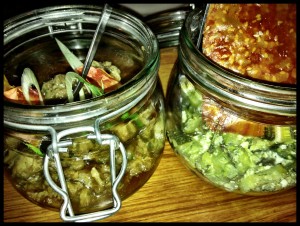 jars of Greek at Mazi

A little dramatic, I know.  And, of course I am only too aware that without any predictability, we would live in a horrifically anxious state.  So, I’m not asking him upstairs to shake things up quite that much.  But, aside from a constant baseline of reassuring goodness, I clearly need a little unpredictability in my life.  I need to know that things won’t always be as we expect they might be.  Particularly when I am flitting from one delicious restaurant to another…. 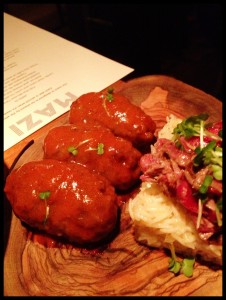 Soutzoukakia at Mazi in Notting Hill

London’s Greek food – in general – (and I know this is going to spark some controversy) doesn’t get much more predictable than Lemonia in Primrose Hill.  Despite many a fun evening spent in this noisy, rustic restaurant, I do find the food to be really nothing special.  So, I was particularly curious to hear of a newish restaurant (it opened in May last year), which describes itself as ‘repositioning Greek food’.

Located in Notting Hill, Mazi, meaning bringing together, feels like a low key local restaurant in an area of town where nothing is particularly low key at all.  Firstly, let’s get the negatives out of the way:  it’s ridiculously hard to park with resident parking until 10pm every night and it’s one of those two-sittings places.  So, I am faced with that choice.  Either I have to leave the Smalls’ teeth unbrushed OR I risk the chance of falling asleep at the table.  I opted for the first bearing in mind the cocktail extravaganza followed by my distinct lack of sleep sharing a room with snoring Smalls the previous night at the Four Seasons Hampshire. 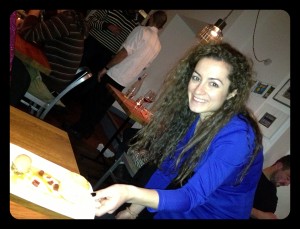 Christina – one of the founders of this unpredictably good Greek

My guest would have been happy anywhere really.  She’s pretty easy to please and, quite frankly, wanted to a life update more than a full on feed.  But seeing as she’s an experimental (in a successful way) cook, I thought she’d appreciate the promised alternative Greek experience.

Mazi is owned and run by Christina Mouratoglou, born in Thessaloniki, and Frenchman Adrien Carre. Spotting said gap in the London market for ‘progressive and interesting’ Greek food, they put their money where they mouths were.  The menu is designed along the theme of togetherness and Christina advised us to choose 5 dishes to share.

We had 2 jars (£6 each) of grilled aubergine with soy and thyme honey and a Kolokithopita – which translates as feta, mint and filo pastry (which needs to be crushed into the jar by you).

On top of these, we shared a greek salad with small barley rusk (£9) and Soutzoukakia, seared beef and sesame maki roll (£11). 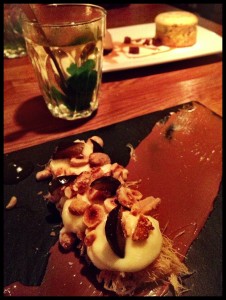 desserts at Mazi – probably the most unusual I have ever tasted…

We finished with the most unusual desserts.  Angel hair in sweet syrup topped with cold almond custard and nuts and a Tsoureki soufflé which had a runny centre (both £8).

To be fair, the Greek does need some translation but Christina readily obliged and advised accordingly.

She is modest yet ambitious.  While also – and equally unusually – a skinny foodie.

I suppose there is some Greek tradition to these dishes at Mazi but not much.  With two consultant chefs from leading restaurants in Mykonos and Athens, it is clear that London’s Greek food is somewhat out of touch with what the real Greeks are eating on their own turf.   Something I could never have predicted.