Swinging and Punching with Born Blonde, Gavin The Champ and Elbow 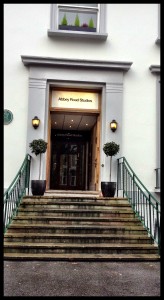 Yesterday began at Abbey Road Studios.  A guest of Absolute Radio, I swung by to hear Born Blonde record a session as part of the radio station’s support of upcoming bands.  I hadn’t heard of Born Blonde (nor the other bands recording for that matter) but immediately loved the sound of this seriously-about-to-break band.  If you’re a fan of the Verve and/or Stone Roses, you will like these retro guitar heroes.  Their tunes are more than decent; twinkly, happy with some original sentimentality. Have a listen and let me know what you think.

The PRs at the studios were polite enough not to question why I was in my workout gear.  Time was of the essence.  I had arranged to meet The Blonde at Sport Studios where Gavin The Champ, world-class kick boxing champion, had promised to take our fitness to a whole new level.  In fact, his website actually promises ‘pain and suffering’.  Sports Studios was founded (and is still run) by Gavin’s dad, George Mckenzie, who also holds numerous world championship titles under his belt. 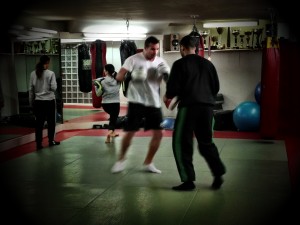 Of course it hurt.  But it was an awful lot of fun at the same time.  The Blonde is hard core so impressed him much.  I just did my best and enjoyed learning some right hook technique while getting some real exercise.  Once we had booked for next week, we crawled back to our respective showers before the school run. 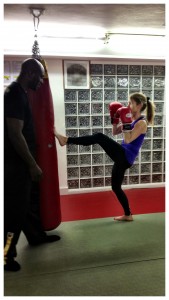 The Blonde give good KICK at Sports Studios

And last but not least was ‘my’ humble, northern Guy Garvey of alternative rock band Elbow at Wembley arena.  I first became aware of Elbow in my AOL days, when we recorded a session with the band (around 12 years ago I think – correct me AOL-ers if I have this wrong).  Never having been commercially huge in the past, they were one of the bands to benefit from performing at the Olympic closing ceremony. After singing One Day Like This, they saw a massive boost in sales prompting them to add another date or two to their 2012 tour. 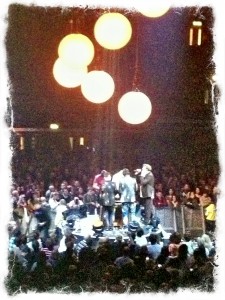 Garvey singing The Night Will Always Win at Wembley 2012

Last night’s concert was a chilled affair.  Wembley was by no means packed to the rafters but those who were there were fully swinging to Garvey’s undoubtedly beautiful voice.  The highlight for me was their rendition (in the centre of the arena) of The Night Will Always Win. It certainly raised a few goose bumps.

I was a guest of Absolute Radio who are hand-picking new and emerging artists to perform for the Absolute Radio Presents the Abbey Road Acoustic Sessions.

Filed under health and fitness, music