I didn’t fancy dinner out in a fancy restaurant on my birthday.  No, I’m blatantly spoilt from eating out too much.  But, when Lady Y suggested that they could accompany us to local Hampstead Theatre to see the new production, Raving, I agreed immediately.  Contemporary, local, cultural and easier on the, now aged-42, waistline.

the cast of Raving, Hampstead Theatre

He needed no convincing. Robert Webb (Peep Show, Mitchell & Webb) really makes him chuckle and, as we cozied into our seats in this small but perfectly formed theatre, we did find the play pretty amusing.  But I’m surprised we did, because Simon Paisley Day’s debut play is real.  Very real.  It’s funny AND it’s real which means that we (the members of the audience who are approx. our age) are basically laughing at ourselves. 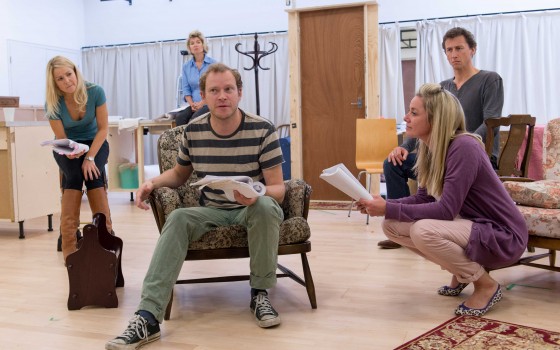 In short, three couples, who escape parenthood for a weekend away in remote Wales, touch on subjects such as marriage, control, temptation, identity and self-esteem as proper rural emotional chaos descends. Tamzin Outhwaite deserves a special mention too as she plays a brilliant right-on-the-edge Briony, without falling flat on her face.

Lady Y laughed but Lord Y didn’t.  I could tell that he thought it wasn’t worth watching.  The truth is that he didn’t realise how real (as well as really funny) it was.  We roared and you probably would too.