The actress Chanel Cresswell is primarly known for her role as Kelly in the Bafta award winning Shane Meadows film This is England.  But her talents are diverse and she has received much praise for her performance in Trollied, Sky’s comedy-sitcom set in a supermarket. The Christmas episode of Trollied will be aired on Christmas Eve.

I caught up with Chanel to find out what inspires and irritates her:

How early in your life did you know you wanted to act? When I was nine years old,  I was in the school play, Bugsy Malone and I played Blousey Brown  … typical.

Which role defined you?  Kelly from This is England has a big part of me, I have played her since I was 15 – a lot of work went into her.

Dreamer or realist?  Realist …. although I do daydream…

What inspires you?  People who try hard and know what they want to achieve.

What irritates you?  I’m pretty chilled although if people make me late or are not time aware … I do find that annoying. 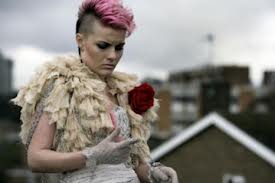 Chanel Cresswell played Kelly in This Is England

Westfield or shop online?   Westfield. I have to try things on and easily return them.

If you could take a flight anywhere today, where would you go?  Australia, I would go and surf and check out the Outback.

Downton or Homeland?  Downton, I haven’t caught Homeland yet.

Best film ever?  Snatch. I loved it when I was at school and the music. I just wanted to be in it.

Tell us a secret.  Jason Watkins and Stephanie Beacham had a garden competition outside their rooms on set .. There were picket fences, gnomes, fake grass and bird houses on the go –  it was pretty funny!