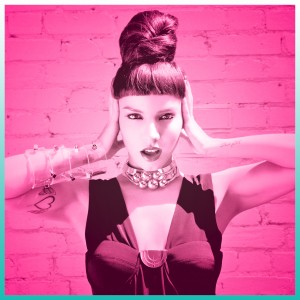 Among those ‘in the (music) know’, there is a great deal of buzz around Ayah Marar.  And none of it is by accident.  Jordon born and raised, Ayah moved to the UK when she was 17 and has immersed herself in the drum and bass scene since then. She has collaborated with Calvin Harris, Camo & Krooked, DJ Marky, Toddla T, Total Science and many of the finest bass music producers around – and I was lucky enough to see her perform last Friday night at Notting Hill Arts Club (after our meal at Santo).

Posised to explode in 2012, Ayah is launching own label Hussle Girl and is determined to unleash her mighty bass music on anyone in her vicinity. Mind Controller was the first single to be released on Hussle Girl and Unstoppable was released on 19th August.

After her performance on Friday night, I caught up with her to find what makes this very cool chick click:

Which is the first tune you remember?

‘Here Comes The Sun’ by The Beatles, my mum use to sing it to me as a child.

What sort of exposure did you have to music growing up?
Lots of it!  I played the piano and did dance for over 5 years. I never went to music school but it was always surrounding me.
Who or what inspires you?
The fact that you can change someone’s mood with something very simple. We tend to overcomplicate our ambitions and make it harder for ourselves.  It’s the little things that count towards a bigger picture.
Who would you love to sing with?
Frank Ocean, Prince, Robyn, Sean Paul.
Early bird or night owl?
I don’t sleep, so night owl, but I don’t sleep in, so bit of both.
Which is your favourite part of London?
Brixton and the Southbank.
flip flops or stilettos?
Flip flops ONLY on the beach if at all … Otherwise heels, Converse or DMs.
Where would we find you chilling out after a big gig?
At a friend’s house with a glass of red wine.
Tell us about Unstoppable?
It’s my new single, produced by Camo & Krooked whom I’ve worked and toured with.  It’s a bit of a summer anthem, something inspiring I hope!
Where to next?
The album is out 15.10.2012 and it’s called THE REAL, I hope to be doing a lot more shows after that, and writing.  Maybe even start on album two!  I’m working to get my independent label HUSSLE GIRL off to a good start.
Tell us a secret about your music …
I always tell the truth.
You can hear Ayah’s Unstoppable here – or download it here.
www.ayahmarar.com