I’m a sucker for a little history, particularly scandalous naughtiness from the 1800s.  So, I was delighted to learn that The Cadogan hotel is infamous for the arrest of Oscar Wilde when he was charged with ‘committing acts of gross indecency’ (we need know no more) in their room no. 118.  Found guilty, he then had to serve two years of hard labour and The Cadogan, the epitome of genteel English luxury, still dines out on this story. Quite brilliant. 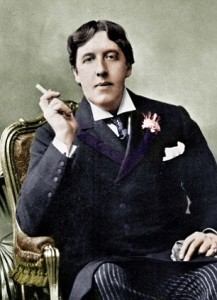 Mr Oscar Wilde was rather wild.

Located on Sloane Street, I couldn’t quite believe that I had never even heard of this hotel, let alone visited it.  But now I had the perfect reason; Fay Machler, the Evening Standard’s food critic of whom I am a HUGE fan, together with her sister, Beth Coventry, ex-head chef of many gastropubs and now owner of The Wells Tavern in Hampstead, have curated a menu as part of Great Taste at The Cadogan.

Is it just me, or is everyone curating something at the moment?  I’d even go as far as saying that the verb, to curate, has become the new marketing buzzword.  Make-up, DJ playlists, jewellery collections… you name it, have been curated by someone with a more impressive Twitter following than the brand in question.  Maybe that’s the only criteria ones needs to curate? 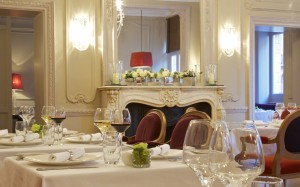 Back to Fay’s menu and our dinner.  I had asked my other blonde to join me on this occasion.  We relished the idea of leaving the dishes in the sink and slipping into a LBD before hot footing it to Knightbridge.  And the hotel, on arrival, felt beautifully grand with its oak floor and elaborate cornicing.

However, the atmosphere in the restaurant was not quite so thrilling.  In fact, I think it would be more accurate to say that it lacked any atmosphere. The Great Taste Awards are a fabulous way of showcasing award-winning British producers from across the UK but… really, is it necessary to stack them on an Ikea-like bookshelf in this beautiful period room?  And what on earth was that naff background music in this quintessentially English dining room owned by Earl Cadogan? 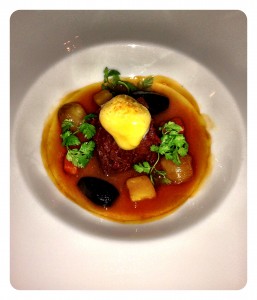 We found ourselves almost apologizing to our rather earnest waiter as we made our choices.  With only four tables taken in the cordoned off dining room (so that we weren’t aware of how empty the restaurant was?), I was surprised that our starters took a good forty minutes to arrive.  But, when the food did arrive, it was simply outstanding.  Jerusalem artichoke soup with griddled Irish soda bread for me and my other blonde was blown away by her choice of corned beef hash.  The menu details which of the Great Taste winners have been included as ingredients, and the corned beef from McCartney’s of Moira was multiple starred as temptation. 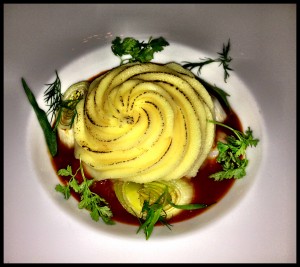 fish pie with award-winning smoked haddock from The Cornish Fishmonger

For my main, I devoured the fish pie which was cooked in the most delicious bouillabaisse broth (think fish soup in South of France) with a leek and potato topping.  And my desert of gooseberry and elderflower ice cream with shortbread went the same direction.  The quality of this cuisine was something else.

And because the meal was such a knock out, we were eager to meet Oliver Lesnik, the hotel’s head chef.  Unfortunately he was too busy in the kitchen to pop up and say hello, despite the four tables now sitting empty, but the slightly irritating background music was still going strong.  One of Oliver’s sous-chefs did approach us as we were leaving so I asked him if the restaurant is always this empty and he confirmed, that it is.

With all that superfluous marketing over-inflating non-worthy products out there, here is one which needs more hype.  The food can’t possibly disappoint even the most discerning foodie (after all it’s got Fay’s stamp of approval), it is extremely reasonably priced and, with a busy dining room, The Cadogan might just get the buzz it needs.